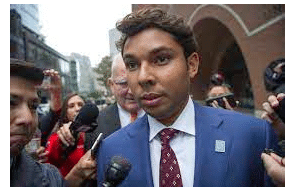 FALL RIVER, Mass. (AP) — A former Massachusetts mayor convicted of extorting recreational marijuana businesses will be allowed to enjoy the holidays as a free man.

A federal judge on Wednesday granted former Fall River Mayor Jasiel Correia’s request to report to prison on Jan. 10, rather than on Dec. 3 as originally ordered.

Correia, who will also turn 30 while still free, asked that the start of his six-year prison sentence be delayed so he can help his wife’s family run their restaurant and associated businesses in Fall River during the busy holiday season. Correia has been managing the Towne House, which includes a steak house, function hall, cigar club and wine bar.

Federal prosecutors had opposed the extension, pointing out that Correia has failed to pay any restitution, saying in their motion “it’s time for Jasiel Correia to pay his debt to society and the citizens of Fall River.”

Correia was convicted in May on 21 counts for defrauding investors in a smartphone app he was developing and for extorting money from marijuana companies seeking to do business in Fall River. But a judge ultimately dismissed 10 charges, leaving 11 convictions to stand.