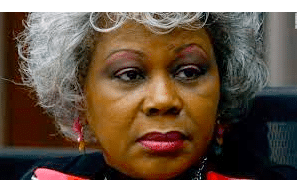 The Lucky Charms cereal bars for sale at Sen. Louise Lucas’s cannabis shop in Portsmouth feature a stoned cartoon leprechaun and a warning that it “contains cannabis, a Schedule 1 controlled substance.”

The label, it turns out, is only partially accurate.

But the packaging overstated the bar’s potency, suggesting it contained 600 milligrams of total THC while the lab test showed just under 30 milligrams.

Both issues—the mislabeled product and the presence of a controlled substance—are typical of the black and gray market for retail marijuana that has exploded in Virginia since lawmakers legalized possession of the drug but not sales.

The resulting demand for marijuana products has presented an opportunity for entrepreneurs willing to take a risk, but left customers with little assurances as to the quality and contents of the mostly-synthetic THC products that have been popping up in gas stations, health food stores and dedicated retail outlets like the one co-owned by Lucas, who as president pro tempore of the Virginia Senate is the most powerful elected Democrat in state government.

“What concerns me is that people don’t know what they’re taking,” said Michelle Peace, a forensic science professor at VCU who has drawn nationwide recognition for her research in the field. “The products are not quality tested but consumers are trusting they are made in a sanitary environment and that the label is accurate.”

Marijuana sold by Virginia’s four licensed medical marijuana dispensaries, which are only open to people with prescriptions, is subject to stringent testing requirements. But there are no such standards in place for retailers like Lucas, who in a brief interview at the Capitol this week expressed surprise that her shop was selling products advertised as containing a controlled substance.

“I sell hemp products and CBD,” said Lucas, who co-sponsored the marijuana legalization bill last year and has touted her cannabis shop in an effort to boost her Twitter account. At her request, the Mercury emailed her questions but she did not respond.

The products for sale in Lucas’s shop, the Cannabis Outlet, are in line with the broader market, according to Peace, who analyzed two samples from the senator’s store on behalf of the Mercury and recently conducted a separate review of 66 products purchased in other stores around the state.

Nearly all of the products Peace’s lab tested as part of the wider review were marketed as containing delta-8 THC, a compound that is nearly identical to delta-9 THC, but which is synthetically manufactured from industrial hemp. Producers argue delta-8 is technically legal despite the fact that it offers an intoxicating high similar to traditional marijuana.

Lab tests showed that all but one of the 66 products were inaccurately labeled: