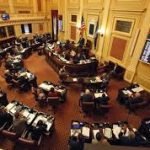 The Virginia Senate approved a bill on Tuesday to decriminalize possession of marijuana.

This comes one day after the House of Delegates passed similar cannabis decriminalization legislation.

It would also raise the threshold for what’s considered distribution or possession with intent to distribute from a half ounce to an ounce.

An expungement provision that was initially included in the legislation was removed in committee and incorporated into a wide-ranging expungements bill that was also approved in a floor vote on Tuesday.

The chamber also unanimously passed another bill to formally legalize possession of CBD and THC-A medial cannabis preparations that are recommended by a doctor, as opposed to simply regulating it and offering patients an affirmative defense, which is the current policy.

The Senate vote on decriminalization was 27-13.