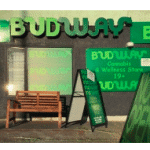 VANCOUVER — The owner of a Vancouver pot shop has been ordered to pay $40,000 to Subway for having copied its branding and logo.

In a decision last week, the Federal Court ruled the Budway cannabis dispensary in East Vancouver had infringed on Subway’s trademark logo and that the shop was benefiting from its association with the eponymous sandwich shop while damaging its brand.

Budway’s storefront is located on Clarke Drive, a loud multi-lane truck route, and features large signs with obvious similarities to Subway’s branding, both in its name and graphics. Subway sued the pot shop and won.

The mental linkage is inescapable,” Justice Nicholas McHaffie wrote in his ruling.

Budway has also been using a sandwich mascot, as evidenced in videos and photos on the store’s Instagram page. The judge describes the mascot as being “in the form of a submarine sandwich filled with cannabis leaves, with what are apparently bloodshot and half-opened eyes” and “smoking what is presumably a joint.”

Photos of the pot sandwich mascot and the Budway logo are still up on the shop’s Instagram page as of publishing this article, four days after the ruling was made.

People commenting on the shop’s social media posts were also making the link between the Budway shop and Subway, according to the ruling.

The shop, Budway, Cannabis & Wellness Store and owner William Matovu have been ordered to pay $15,000 in damages to Subway and $25,000 to cover Subway’s legal fees. Budway has also been ordered to destroy any “goods, packaging, labels and advertising material” that bear its logo.

Budway’s branding damaged the “goodwill” that customers have towards Subway, said McHaffie. That’s because the shop sells marijuana, which the judge said is “in contrast with the ‘healthy and active’ lifestyle” of the Subway brand. Furthermore, it appears to be operating without a provincial dispensary license and has “a somewhat downmarket exterior presence.”

The judge also noted that the shop and its owner had not mounted a defence against Subway’s lawsuit.