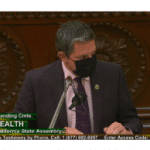 The State Health Committee heard testimony June 8th that suggests cannabis use in hospitals is closer than previously thought.

Testimony at a California State Health Committee hearing June 8 shed light on the potential for terminally-ill patients to use cannabis in California hospital facilities and, possibly, nation-wide.

The testimony was given during a hearing for Ryan’s Law (CA SB311) sponsored by Jim Bartell and CA Senator Ben Hueso. Bartell’s adult son, Ryan, was forced to move from California to Washington state in order to use cannabis instead of coma-inducing morphine for his pain while in end-of-life hospice care.

“CMS does not prosecute hospitals for in-facility use. They have no federal mechanism to do so.”

Testified Dr. Larry Bedard.  Chair of the Marin Healthcare District and a member of the American Medical Association Cannabis Task Force, Bedard tried himself to enact in-patient use at the northern California health system in 20161.

The testimony referred to Bartell’s correspondence with CMS and other government agencies.  Correspondence that not only yielded specifics on current regulation but offered insight on how terminally-ill patients may be able to legally use cannabis in hospitals nationwide. “Even more encouraging,” testified Lyman, “Jim has identified an existing Federal pathway that would allow the terminally ill access to cannabis without exposing a hospital to potential legal or financial issues.”

This is not the first time Ryan’s Law has had to pass the California legislature. The first iteration of Ryan’s Law was approved unanimously by the California State Assembly in 2019 but vetoed by Governor Newsom.  California hospitals voiced at the time that neither the Governor nor the legislature could offer absolute protection from the theoretical risks involved with enacting the law.

Undaunted, Bartell redoubled his efforts, reaching state and federal agencies that could help the tens of thousands of patients like his son Ryan. With Senator Hueso’s help, he  reintroduced the bill (SB 311)  to the legislature  and plans to get it signed by the Governor.

“There is a path to getting this done for Californians and for patients like Ryan across the country.” says Bartell. “I’m talking to groups in five other states right now who are preparing their own Ryan’s Laws.  We just need support from the Governor’s office and other agencies to make this happen.  If I can find a pathway for this, as a father, then a partnership of our state and federal representatives should be able to come through for people like my son Ryan who are suffering at the end of their lives.”

Dr. Lyman concluded his testimony by saying “This bill is worthy of careful review and support by this body and the Governor’s office. The terminally ill and their families deserve this relief. Jim has done much of the heavy lifting for us. Please join us now in solidifying this pathway.” Dr. Bedard ended his testimony with a similar plea to lawmakers and the Governor’s office, “Pass this bill and stand up for the rights of these patients. Contact Jim and Senator Hueso to learn more about their discussions with federal health regulators, and about our need for help from the Governor’s office, to make cannabis access for terminally ill patients a reality.”

Following unanimous approval from the Assembly Health Committee the bill now moves forward to consideration by the full Assembly.

See our original story and background on Ryan’s Bill