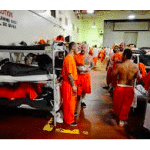 Prison inmates can’t legally possess marijuana under California’s law allowing recreational pot, the state Supreme Court ruled Thursday in overturning a lower court that found prisoners could have the drug as long as they didn’t consume it.

The justices said the 2019 appellate court ruling allowing prisoners to have up to 1 ounce (28.5 grams) of marijuana went against common sense. The high court sided with the state attorney general in finding the state’s marijuana law approved by voters did not apply to Californians in prison.

“It seems implausible” that the voters intended to essentially decriminalize marijuana in prisons, Associate Justice Joshua Groban wrote for the majority.

“We agree with the Attorney General that if the drafters had intended to so dramatically change the laws regarding cannabis in prison, we would expect them to have been more explicit about their goals,” he wrote.

California in 1996 became the first state to legalize medical marijuana, which also is illegal in its prisons. Twenty years later, voters approved Proposition 64 establishing the world’s largest legal recreational pot marketplace. People 21 or older can legally possess up to an ounce of marijuana.

Five defendants, all of whom were serving a sentence for a conviction of Penal Code section 4573.6, an offense that is no longer a crime pursuant to the Control, Regulate and Tax Adult Use of Marijuana Act (Health & Saf. Code, § 11361.8), filed a petition requesting relief under Proposition 64 and an accompanying motion to dismiss. The superior court denied each of the petitions. The defendants appealed. The Court of Appeal determined the plain language of Health and Safety Code section 11362.1, enacted as part of Proposition 64, provided that possession of less than an ounce of cannabis in prison was no longer a felony. Smoking or ingesting cannabis in prison remained a felony and prison regulations forbade possession. “The Attorney General uses arcane rules of statutory construction, twists the meaning of the words of the statute, urges us to disapprove of cases directly on point, and makes a host of policy arguments why we should not apply the plain language of the statute. The question of law we review de novo is whether the plain language of the statute leads to an absurd result. We conclude it does not. A result is not absurd because the outcome may be unwise. Cognizant of the humble role of the courts in construing statutes, not rewriting them to subscribe to our version of sound public policy, we reverse the trial court’s denial of defendants’ petitions for relief under Health and Safety Code section 11361.8.”