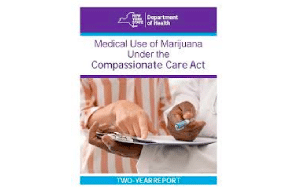 In 2009, Martin joined the Buffalo Fire Department, worked at different stations, before he accumulated enough seniority to land his dream job at the 1st Platoon Truck 14.

But he said by late last year his life got turned upside down in a dispute with the city and fire department.

“I lost my dream job, and the way it happened was horrible,” Martin said.

On February 23, the Buffalo Fire Department terminated Martin after a urine sample came back positive for marijuana metabolites in violation of their collective bargaining agreement.

But here’s the rub: Martin is a medical marijuana patient, protected by the state’s Compassionate Care Act. He is medically prescribed marijuana in the form of vapes and capsules to reduce pain, anxiety and PTSD, which the Act considers to be disabilities.

Martin has since filed a grievance through his union, an Article 78 and a civil lawsuit to overturn the city’s decision, all of which are pending.

Whichever side prevails could dictate how government and private employers work with unions to amend collective bargaining agreements to account for the medical use of marijuana, and even recreational use made legal this year.

“To my knowledge, it’s the only one of its kind going on in New York State,” said Martin’s attorney, Dave Holland. “I bring it more as a harbinger of what is the paradigm shift I keep talking about: What is the change in our social appreciation for this medicine that needs to be brought into account in contracts?”

Holland argues that Martin’s protected by the Compassionate Care Act. He said collective bargaining agreements – the contracts between unions and employers- can’t snatch those rights away from people who are legally prescribed medical marijuana.

“He’s been totally eliminated from being a productive citizen in the way he was before and he’s being discriminated against in our opinion and demonized for being a medical cannabis patient, which in fact has proved itself to be extremely valuable,” Holland said.

The City of Buffalo declined to comment on the pending litigation.

A city spokesman wrote in a statement that, “The City of Buffalo, like every municipality, is grappling with changes in laws regarding cannabis use.”