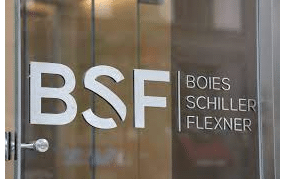 Several leading marijuana businesses and stakeholders are banding together to sue the federal government over what they believe to be unconstitutional policies impeding their operations, according to the CEO of one of the companies. And, he says, they’ve retained a prominent law firm led by an attorney who has been involved in numerous high-profile federal cases.

There have been various attempts to upend federal prohibition through the court system, but what makes this emerging effort especially notable is that the coalition of multi-state operators (MSOs) in the cannabis industry will apparently be represented by the firm Boies Schiller Flexner LLP.

David Boies, the chairman of the firm, has a long list of prior clients that includes the Justice Department, former Vice President Al Gore and the plaintiffs in a case that led to the invalidation of California’s ban on same-sex marriage, among others. The prominent firm’s willingness to take on the case from the marijuana industry would be a firm indicator that they see merit to the issue at hand.

Abner Kurtin, founder and CEO of Ascend Wellness Holdings, told Marijuana Moment in a phone interview on Friday that this is an “industry-wide effort,” with at least six major cannabis operators “favorably disposed” to joining the suits—one of which would focus on stopping the federal government from impeding intrastate cannabis commerce and another challenging a tax provision known as 280E that blocks the industry from taking tax deductions that are available to any other company.

Among the prospective supporters are Curaleaf and TerrAscend, which are “working with me very closely,” Kurtin said. The American Trade Association of Cannabis and Hemp (ATACH) is also apparently involved in these conversations.

Michael Bronstein, president of ATACH, told Marijuana Moment that the organization “firmly believes that the Controlled Substances Act and 280E provision of the Internal Revenue Code are being misapplied to legal businesses and merits constitutional protections.”

“ATACH continues to evaluate and explore potential legal options,” he said, without directly commenting on the organization’s potential involvement in the current litigation effort described by Kurtin.

The plan is to file the two lawsuits in federal district court “in the next couple of months.” There are still legal documents that need to be signed to formally involve the other companies, but he said it’s effectively a formality at this point.

One lawsuit will take aim at the federal ban on intrastate marijuana commerce and contest the constitutionality of the Controlled Substances Act (CSA) under a unique interpretation of the Commerce Clause of the Constitution. In part, the plaintiffs will make the case that prior court rulings on the federal government’s authority over intrastate commerce, particularly concerning fungibility, should not apply to marijuana companies in highly regulated state-legal markets.

The federal government’s position on its influence over intrastate commerce has been largely based in market fungibility, or the fact that just because a given item is grown in one state it can still affect pricing in other states, and therefore the feds still have jurisdiction over intrastate industries under the Commerce Clause.

That was effectively what the Supreme Court determined in a 2005 case in which California medical cannabis patients argued that the 10th Amendment protected their right to access marijuana that was authorized to be grown and used within the state. The Court at the time ruled against the patients, saying that even though the cannabis plants in question stayed within California, it could have had an impact on the national illicit market for marijuana.

But that’s no longer the case for state-legal marijuana, Kurtin said, especially as markets have matured in an isolated and highly regulated way within state borders that undermines the notion that cannabis grown in one state could impact pricing elsewhere.