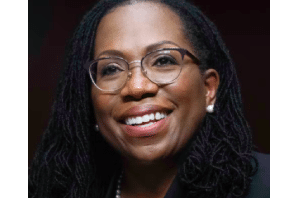 Leafly have done a bit of digging..

If nominated, the 51-year-old Jackson will enter the maelstrom of scrutiny that surrounds top court nominees in our hypercharged political environment. But if you’re turning to Leafly for news about a Supreme Court nominee, you want to know one thing: Where does she stand on marijuana legalization?

Here’s what we know.

A brief survey of Jackson’s appearances in the media turns up no direct statement regarding legalization.

But there are plenty of entries on her resume to indicate that she’d give any legal challenges to prohibition at least a fair hearing.

Ruth Marcus of the Washington Post, in a piece just published this morning, gives heavy weight to Jackson’s two years of experience as a public defender in Washington, DC. “She would be the first justice to have served as a federal public defender,” Marcus wrote, “two years in the appellate office of the D.C. public defender service. Not since Thurgood Marshall has a justice had such extensive experience representing criminal defendants.”

During her confirmation hearing for a seat on the federal appeals court, Jackson told a Senate confirmation committee that “there is a direct line from my defender service to what I do on the bench.”

Any lawyer who has spent a single day as a public defender has had firsthand experience with the inequities and cruelties of America’s marijuana laws.

Jackson’s interaction with the nation’s drug laws didn’t stop there, though. Later in her career she served on the US Sentencing Commission, which was charged with reforming the outrageous racial disparities in our nation’s drug laws.

After Congress moved to close the gap between sentences handed down for crack and powder cocaine—i.e., in many cases, the gap between Black and white defendants—Jackson argued that the changed sentencing guidelines should apply retroactively to people serving federal sentences for crack possession.

“My vote today does not resemble any caricature of a policymaker intent on freeing violent felons without authorization and against congressional will,” Jackson said. “If ever the day should come when the retroactive application of a guideline … furthers our societal interests in equitable sentencing and the avoidance of unwarranted disparity,” she continued — and here she paused to emphasize every word — “this is that day.”

Her words contain obvious implications for the thousands of Americans serving outrageous sentences for cannabis—many of whom have or will see cannabis turn legal in their state, and may one day see it turn legal under federal law.

Stay tuned. The fight over Judge Jackson’s nomination has just begun, and our nation’s unjust drug laws and historical stigmas often play a role in ways both politically symbolic and legally substantial.