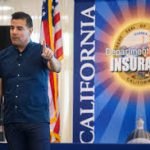 California Insurance Commissioner Ricardo Lara is at the forefront of shaping how state insurance regulators all over the U.S. will deal with the legal cannabis market. Reports Insurance Journal

Lara is not only the chief insurance regulator of the nation’s largest cannabis market – one that other states with legal and medicinal programs coming online are using as an example – but he also chairs the National Association of Insurance Commissioners’ Cannabis Insurance Working Group, which in December approved a white paper outlining a framework for other states regulating insurance for the cannabis industry to follow.

The white paper outlines the challenges for the insurance industry in regulating cannabis and it establishes a guideline, or a starting point, for state insurance regulations.

If there’s one take home from the paper for regulators to consider, it’s that there’s much to be done, according to Lara.

“It also points out that we’re not there yet,” Lara said, describing the intent of the paper.

After just a year in office, it’s easy to identify in what areas Lara is positioning himself to take the lead among state insurance regulators.

Cannabis and insurance is another hot topic for Lara.

Lara has continued an existing practice of encouraging insurers in the admitted market to offer more products and services to what he believes is an underserved cannabis industry, an effort that was started by Insurance Commissioner Dave Jones back in 2017.

Last week Lara paved the way for people with cannabis-related convictions to become licensed insurance producers. Lara said the California Department of Insurance will use its discretion in deciding whether to issue licenses to those with cannabis-related convictions in support of Proposition 64, the Adult Use of Marijuana Act, approved by voters in 2016.

The action clears obstacles to becoming an agent, broker, or other licensee for those whose past convictions are eligible to be dismissed or reduced under the current law.

“When voters passed Prop 64, it was in line with our changing attitudes,” Lara said, explaining his reasoning for the step.

Lara said after the decision that one question he’s gotten is how the California Department of insurance will make sure consumers are protected.

Insurance Most Needed by Cannabis BusinessesThe NAIC’S Cannabis Insurance Working Group in a recently approved white paper identified some of the most pressing insurance needs of cannabis businesses.Insurance most frequently needed by the cannabis industry includes:

Elaborating on his earlier “we’re not there yet,” comment, Lara noted that one of the key findings of the NAIC white paper is that more insurance products are needed for the cannabis industry.

“Insurance availability continues to lag behind the needs of the cannabis industry,” Lara said.

The white paper calls attention to “substantial gaps in insurance coverage for the cannabis industry,” with glaring needs for all cannabis segments – cultivation, manufacturers, testing labs, distribution and retail.

Lara believes the best way to address the gaps are for states to engage admitted insurance carriers and encourage them to offer more products for cannabis businesses.

“That is key to getting the admitted cannabis product onto the market,” Lara said.

Even in California, where seven admitted carriers are now offering comprehensive coverage, up from just one when Golden Bear’s filing to sell cannabis business insurance was approved in 2017, there still isn’t enough coverage available in Lara’s opinion.

“No doubt that does not meet the demand of our businesses in California,” Lara said. “We’re behind.”

He added: “I think we are unfortunately behind the curve in this emerging market.”

Perhaps the biggest challenge to getting cannabis businesses more access to insurance is that marijuana continues to be treated by the federal government as a Schedule 1 drug, making it difficult for these businesses to access essential services, such as banking, Lara said.

Asked if he supports the SAFE Banking Act, which would enable cannabis businesses access to regular banking services – the bill has been in limbo for some time in the Senate – he responded: “Absolutely.”

But until something big happens at the federal level, Lara believes that state insurance regulators must do what they can to encourage more products and innovation, and believes the NACI white paper is a good start.

“I think the bones of the white paper really give you a framework by which states can start making the changes necessary to be successful with their own cannabis industries within their own states,” Lara said.