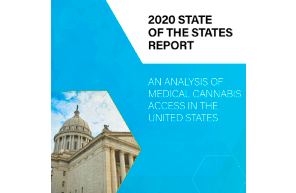 The organization has, they say, ……evaluated patient access, affordability, equity, and product safety.

“With a decline in legislative improvements in state medical cannabis programs, millions of patients are left with limited or no access,” ASA Executive Director Debbie Churgai said. “It is ASA’s hope that the report will inspire a renewed commitment to patients by policymakers to improve state laws and end the federal prohibition once and for all.”

The 2021 State of the States Report: An Analysis of Medical Cannabis Access in the United States evaluated the effectiveness of each state cannabis program from a patient point of view while issuing letter grades reflecting issues impacting patient access covering more than 100 categories.

Pennsylvania State Rep. Chris Rabb (D-District 200) said the report has served as a resource he utilizes to ensure all Pennsylvanians have access to medical cannabis.

“As the largest cannabis patient advocacy group, their recommendations have helped me hone in on issues that impact patients and work to pass improvements to better their lives,” Rabb said. “The report has also been a critical tool in educating my colleagues on the shortfalls of the current program and why improvements are necessary for Pennsylvanians.”

The analysis explores barriers to access, civil protections, affordability, health and social equity, and product safety, as well as penalties for detrimental policies.

25 years have passed since the first medical cannabis laws came into effect in California, and this year marks the 20th anniversary of ASA’s role in the fight for safe access. Although conditions have improved for patients significantly in the past two decades, our 2021 State of the State report clearly shows that even after 25 years, states are falling short on providing safe, legal, and affordable access to ALL patients.

Since 2014, Americans for Safe Access has been publishing the State of the States report as a tool for local advocates and policy makers to understand and improve their medical cannabis program. What this report reflects is that the state-by-state model does not address many medical or logistical needs for patients, it only serves a privileged class of Americans with the resources available to access medical cannabis. There are a litany of barriers patients still face to access, some of these include health insurance coverage, product availability, proximity to retail location, federal employees and contractors as well as veterans utilizing VA medical services exclusions, and private companies that drug test for cannabis where no state government steps in to protect them. And these only scratches the surface of the problems patients face across the country.

Each year, as we prepare to publish our State of the States report, we like to take a step back and look at the top general trends that we notice across the report.

1. Growth is a General Trend

Although there has been an increase in adult-use laws throughout the US, individuals are still choosing to register as medical cannabis patients for improved access to safe cannabis and legal protections. In fact, only 4 states had a patient population that shrunk since last year (Alaska, Massachusetts, Michigan, and Oregon) every other program saw an expanding patient population. Many states even saw significant population surges among registered patients; new programs like North Dakota and Utah doubled in size, while Missouri tripled. The most notable growth among the established programs happened in the District of Columbia and Florida, both of which saw over 70% growth over our previous report’s findings. There are now over 5.1 million legal medical cannabis patients across the country and territories, and at least 13 states that have over 100,000 registered patients. With the number of people relying on medical cannabis growing year after year, there needs to be coordination between states to ensure that patients in different states aren’t getting wildly different treatment, especially if the federal government expects states to export and import cannabis amongst each other as needed.

Small improvements, such as telehealth, curbside pickup, and delivery, made dramatic improvements to patient access in the jurisdictions where they were allowed. In most states, these measures were issued without legislative approval which goes to show that small changes deeply impacting patient access can be made quickly.

Prior to 2020, very few states provided alternative accessibility methods, like delivery and curbside pickup, for cannabis patients. In March 2020, as the first cases of COVID-19 began to spread in the United States and lockdown orders loomed, ASA sent letters to governors and directors of state medical cannabis programs asking them to take immediate action to ensure that patients continue to have access to medical cannabis and that the supply chain is not interrupted. Our recommendations to states included: declaring medical cannabis businesses essential, extending the expiration dates of patient registrations, and implementing rules to allow telehealth access, curbside pickup, and delivery. A majority of states with medical cannabis programs rightfully acknowledged that access is essential for patients and instituted temporary measures that aligned with many of our recommendations.

As of today, 8 states have chosen to make at least 1 COVID emergency measure permanent while the majority have extended their temporary measures further. Only two states so far, Florida and Colorado, have allowed their COVID measures to expire fully.

3. The Cost of Medicine Remains a Major Burden for Patients

Affordability remains a top issue for patients across the country. In our annual survey for this report, we asked patients to rate, on a scale of 1-5, what they thought of the cost of their cannabis medicine; 1 meaning medicine is affordable, 5 meaning cost is entirely prohibitive. The average score recorded from among hundreds of responses was 4.14. 70% of respondents said that the cost of medicine was either very prohibitive or entirely prohibitive compared to 6% who responded that medicine was fairly affordable or affordable. It is clear that the cost of medicine is burdensome for patients, but the cause of high prices varies from state to state. Oftentimes, something as simple as taxes can make the burden much worse for patients.

The high cost of medicine isn’t the only burden on patients. Oftentimes, the administrative process can be quite cost prohibitive for patients. When fees for physical cards, registrations, and physician visits are all taken into account, patients in some states are paying up to $350 before they can even acquire medicine from a dispensary. In a state where any adult over the age of 21 can buy cannabis, often from the same retailer, these program fees are a cost that many patients might not see the benefit in paying.

Our new Affordability section was overall the weakest performing category; the average score across all states was only 39.69%. The highest graded state in this category, Illinois, earned only 65% of the points possible.

4. No State is Perfect, There are Always Improvements to be Made

The trend of low affordability scores across all states is illustrative of a larger picture; though we have come a long way since the first medical cannabis law passed in 1996, we must also recognize that none of the state laws adopted thus far can be considered ideal from a patient’s standpoint. Even the states with the highest grades have areas for improvement. For example, our highest graded state, Maine, earned 76.14% of possible points on our scorecard. The areas of improvement for Maine are the same that most of the country struggles most with; Affordability where it only scored 60% and Consumer Protection and Product Safety, where it scored 61.5%. To fix the first score, Maine’s legislators should consider allowing coverage for medical cannabis from health insurance and a donation program for low income patients.

Consumer Protection and Product Safety is another nationally low-scoring category with the average score at just 41.44%. This is our most meticulous section with four subcategories covering dispensaries, cultivators, processors, and laboratories; each on how they manage elements such as quality management systems, staff training, standard operating procedures, pesticide usage, environmental impact, required product testing, packaging and labeling, and recall procedures. The low average score represents a nationwide failure to ensure the safety of medicine for patients. Patients, especially those with respiratory conditions, are too sensitive to elements like mold or heavy metals. To be assured safe, cannabis must be tested for all of these elements and there must be transparency for patients through product labeling.

Patients in states that have received low scores may want to ask if a particular dispensary or cultivator has been certified by our Patient Focused Certification (PFC) program.

Cannabis patients, caregivers, physicians, and researchers alike can attest to the heavy burden of federal inaction on cannabis policy. Currently cannabis policy is decided largely in a piecemeal approach with one agency controlling research while another controls licenses, and in some instances, multiple agencies claim jurisdiction over a policy decision which leads to more confusion and inaction. This confusion leaves cannabis patients and researchers in the lurch. By having one national coordinating entity responsible for all cannabis policy at the federal level, states can begin making substantial improvements for patients. Researchers, physicians, government officials, and the public alike can benefit from a more intentional approach to medical cannabis policy.

The disorganization of product safety requirements across the states and piecemeal patient protections can not be solved at the state level alone. Historically, states have incubated many new policies such as health care models and clean air legislation but in order for these policy platforms to reach their potential there is a point when they must be adopted into federal policy. That time has come for medical cannabis policy. Over the past 25 years, states have shouldered the burden of figuring out how to regulate cannabis. However, the federal prohibition makes sharing this work across state lines, utilizing resources from other established industries, and facilitating support with supply shortages difficult if not impossible. An Office of Medical Cannabis Control should be created to help individual states coordinate solutions to these problems.

As we move forward with the hope of changing federal cannabis policy, we must not forget the issues that affect patients. The average score among all states was only 44.38%, highlighting the fact that there is much more to be done if we are to live in a country where medical cannabis can be available to all who need it. Federal coordination would do a lot to help patients in the areas where state governments continue to fail them. But for now, all states, even those with adult use laws, must continue to prioritize patients and make improvements towards the medical cannabis program.