Khiron Life Sciences Corp. has played an interesting game globally for some time now. Far from a “high flier” in the first tiers of Canadian cannabis companies to watch, that may be changing. Not to mention, this fall, what exactly do these labels mean right now as almost all the first movers retrench and reconsider?

How and where Khiron’s influence will be felt however, is still very much a question in the air.

The big news? The company has obtained authorization from the Colombian government to commercialize high-THC cannabis, and further, for both domestic and international consumption.

There are several interesting things about this announcement.

The first is that Khiron inevitably got its domestic license to supply a 15,000-patient trial “at home” in Columbia (and for the prestigious Latin American Institute of Neurology and the Nervous System).

The second is that the company will also be exporting – and to where.

Uruguay is at the top of that list – starting with the fact that the country has had a “recreational market” that actually predates Canada’s. To import medical cannabis here in other words, is also an interesting statement in and of itself. Namely, what is wrong with domestically produced Uruguayan product? Even and especially in this case, for the medical market? (The answer of course has more to do with U.S. banking law than product quality).

The second is the UK where the company will also supply the patient trial there – Project Twenty21. This is even more intriguing considering that the NHS has just denied the efficacy of cannabis for treating neurological conditions and pain and only recently agreed that Sativex was “cost effective” after negotiating a lower bulk price with GW Pharmaceuticals made possible by the new NICE guidelines.

The third is Brazil – a growingly valuable market now firmly on the radar of those watching all things cannabis-related in the hemisphere.

Regardless, it shows that the lights are on in the executive suite at Khiron. The question is, will this early mover advantage pay off – and more interestingly, where?

A Hemispheric Play – But In Which Long Term Direction?

While the UK at least seems to be Brexiting itself off a cliff of free trade agreements with the world (and expect cannabis to be in the early room of conversation about commodities in this regard), is Latin American cannabis really price impactful in low price per gram Europe long term? Especially given the inclinations of a company whose CEO admits in press statements that he wants to be a “Starbucks of Cannabis” – selling not coffee beans at “80 cents a pound…” but rather a cup of coffee “for four dollars.”

That is a still-to-be answered question. Especially in an environment where the German government has announced its essential reference wholesale price for floss at €2.30 per gram (around four dollars American). Not to mention what is going on domestically in countries across the continent from Denmark and Portugal to Poland.

However, what all this positioning also does of course, is pose questions for Khiron’s intentions throughout the American hemispheres, both more locally and of course north of the Rio Grande (in the U.S. market) not to mention Canada.

This is the kind of reverse hemisphere play of course that everyone in North America has been expecting since Uruguay’s early market movement earlier in the decade. The great South American fruit and veg market is finally allowed to turn to legal production in the form of cannabis.

Is the “Drug War” finally in its last, dying days? The answer appears to be yes. Trade wars, inevitably, however, are looming. Protectionism in the cannabis industry may be a new flavour of the day but not in any other agricultural or indeed any other kind of commodity. And on this front, things are also likely to be fierce.

Across the country and across the world, governments that legalize cannabis implement increasingly...view more

In 1887, Julius Petri invented a couple of glass dishes, designed to grow bacteria in a...view more 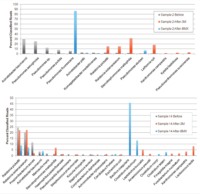 Microbial contamination on cannabis products represents one of the most significant threats to...view more

Researchers at the University of Georgia will study the effects of legalized medical cannabis on...view more

On the heels of its decriminalization in a handful of US cities, psilocybin is being explored by...view more

The United States Department of Defense and GW Pharmaceuticals are collaborating on a new clinical...view more

Researchers at the University of Notre Dame in Western Australia want to transform the way we treat...view more

A New York clinical trial will study the effects of the cannabis compound cannabidivarin, or CBDV...view more