(Welcome back to our one-time intern Jimi Devine, who has graciously volunteered his time to support our blog.) 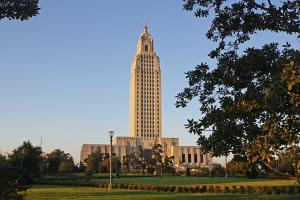 The smell of marijuana reform is strong in the bayou air, Louisiana is now home to a big push for both medical marijuana and major sentencing reforms around marijuana convictions.

Today the Louisiana legislature’ House Health and Welfare Committee will hear a medical marijuana bill brought forward by Republican State Senator Fred Mills, a man who formerly served as head of the Louisiana Board of Pharmacy. Mills spent the last year working with law enforcement to make it past a committee and organizations that had held it back in the past.

According to Northeast Louisiana media outlet The News Star, major revisions have been made with support from the Louisiana Sheriffs Association, they include:

This session the bill made it through the Senate Health and Welfare Committee that halted its progress in 2014, and then passed the full senate with two thirds in support. On when he takes it before the house Mills noted, “I’m hoping for a repeat performance from the Senate.”

While the bill is very restrictive, but it would reinforce national trends on the medical use of marijuana in Louisiana. Hopefully leading to a more inclusive law in the future.

The sentencing reform bills look to reduce the penalties associated with a marijuana conviction in the state. Currently a third marijuana possession conviction could lead to a baffling 20 year sentence.

According to NOLA.com, the bill authored by New Orleans State Senator J.P. Morrell,

“reduces the maximum penalty for possession from 20 years in prison to eight, raises the threshold for a felony-level possession charge and adds a second-chance provision for first-time offenders.”

Penalties would still be much more severe than their counterparts in other states, but first time offenders would have one opportunity to expunge their record after two years without a conviction. The bill would also reclassify a second offense from a felony to misdemeanor for quantities between fourteen grams and two and a half pounds.

The bill is projected to save Louisiana $17 million over the first five years. This would cover the $900,000 a year in wasteful spending on corrections highlighted by the Office of State Inspector General with $13 million to spare.

“Such a bill does two important things. First, it establishes that a person with a small amount of weed isn’t a real threat to the public. Second, and perhaps more importantly, the bill would keep such a conviction from haunting a person forever.”

The second bill authored by Rep. Austin Badon would push major reforms, but is not as big a shift as the one presented by Morrell. Badon’ bill would see those committing a third offense jailed five years, as opposed to the two year sentence in Morell’ bill. It also does not include the possibility of conviction being expunged for first time offenders.

UPDATE: On Thursday Louisiana Governor Bobby Jindal said he would sign the bills if passed by the house and senate. In regards to the sentencing bill he told the Shreveport Times,

“We’ve said all along we’re fine with the idea of providing rehabilitation and treatment for nonviolent drug offenders. I think this bill does that. That’s good for those offenders, that is good for taxpayers. So again, that’s another one of those bills that if it got to our desk we’d sign that.”

While Louisiana debates the direction of their sentencing procedures, I’ll leave you with another quote from Jarvis DeBerry on the subject:

“Here’s a prediction: Sooner or later, we’re going to look back at what Louisiana has doing to folks caught with marijuana, and we’re going to be just as shocked those sentences had our officials’ blessing.”