Recreational marijuana is officially on the fast track to store shelves in Oregon after Governor Brown signed a law Tuesday that would allow medical marijuana dispensaries to sell recreational pot to adults beginning October 1st.

Although the number of pot dispensaries in Oregon have almost doubled since 2013, local businesses say opening up shop is not as easy as it sounds.

Matt Walstaller opened Pure Green back in January 2014, but he said the ride down the marijuana business lane has not always been smooth.

“A lot of people think this is weed, I’m going to make millions but it’s not that easy.”

Since planting his feet on the corner of 37th and Sandy in Northeast Portland’s Hollywood District, he said he saw the growth of marijuana dispensaries in the area.

“They’re just everywhere and they’re popping up faster and faster.”

But at the same speed, he said he has also seem them close down.

“We’re in a limited market because we can only sell to card holders, its highly saturated, there’s always way too many shops to serve the market and its not the same as the old days where all you had to do was grow it and sell it.”

He said his shop has done well since opening because unlike many cannabis businesses, he was prepared.

Since 2013, the Oregon Health Authority said there were 100 dispensaries in Oregon. Today, there’s about 300, with permits pending each day. Heidi Marks is owner of the Green Oasis.

“When I first found this location, it was like a dispensary desert,” she said.

She has also seen and felt the impacts of the growing market.

“I opened it thinking I got this and realized I don’t have this,” she described.

Marks said she’s also seen shops like one she recalls off Nato Parkway open, then close in the blink of an eye.

“I was shocked because I don’t think they were open for 6 months.”

Dispensaries who are approved to sell recreational pot starting October 1st can only sell a quarter ounce of marijuana and up to four plants per person, per day.

A major hurdle for recreational cannabis sales in the Bay State was cleared on Monday. The...view more 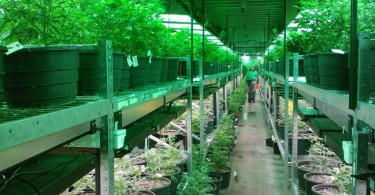