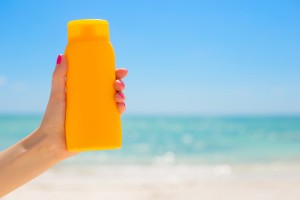 Preventing and Fighting Skin Cancer Naturally
It’s the height of summer, and that means barbecues, swimming pools, and beach vacations—in short, hot fun in the summertime. We’ve all been told over and over that we need to wear sunscreen to prevent wrinkles, skin damage, and skin cancer.

But a lot of people are concerned about the chemicals used in mainstream sunscreens, and with good reason: many widely used sun block active chemical ingredients, like homosalate, octinoxate, and oxybenzone, disrupt hormones (mimic, block, and alter hormone levels), which can throw off your endocrine system. These chemicals have been deemed toxic by the Environmental Working Group (EWG). An article in Women’s

Health Magazine says that these chemical ingredients can generate cell-damaging free radicals when exposed to the sun. So what’s the alternative? One choice is hemp sunscreen.

Many plants, including hemp, naturally contain compounds that block UV rays—the plant needs to protect itself from the sun, too. The SFP of hemp is about 6, which is probably not enough for most people, but can be combined with other natural sun blockers to boost its effectiveness. Hemp oil is also easily absorbed through the skin, so it moistens and hydrates while it fights harmful UV rays.

Signs of Skin Cancer
Wearing sunscreen is great, but it’s no guarantee: you should regularly check to see if

you have any signs of skin cancer.

Here’s what to look for:

• Basal Cell Carcinoma – This most common type of skin cancer is characterized by a reddish patch of scaly skin, a red lump, a bleeding sore that keeps returning, a shiny red or pink patch, or a hard growth. It’s rarely fatal, but it can grow quite large and look quite ugly.
• Squamous Cell Carcinoma – This is another very common type of skin cancer with similar symptoms to basal cell carcinoma, but if left untreated, it can spread to other organs and become deadly.
• Melanoma – The rarest of skin cancers is also the most deadly. Early phases are easily treated, but by stage IV, melanoma could be fatal. It usually occurs in moles, so check your moles for changes regularly. The signs are easy to remember: the A-B-C-D-Es of melanoma:

Treating Skin Cancer with Cannabis
Chemicals found in both medical cannabis and industrial hemp, called cannabinoids, have been shown to fight cancer, including melanoma.

The human receptors that interact with cannabinoids, CB1 and CB2, are widely 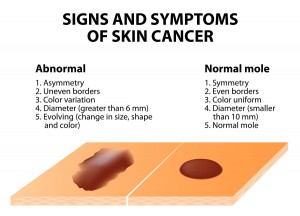 distributed under the skin. One study found that activating these cannabinoid receptors caused cell death in non-melanoma skin cancer.

Because certain cannabinoids block UVB rays—solar rays that can damage DNA—cannabinoid-based sunblock may have the capability of not only preventing sun damage, but also prevent cancer and trigger autophagy (malignant tumor cell death).

So remember: protect your skin with sunscreen that doesn’t contain unsafe chemicals (we like sunscreens with hemp oil), check yourself regularly for signs of skin cancer, and consider using cannabis oil to heal skin cancer tumors. And have a safe and healthy summer!