A metro Atlanta mother is a few giant steps closer to seeing if now legal medical marijuana will help her 2-year-old daughter.

11Alive is following Erin Cleveland on her journey to getting cannabis oil for her daughter Lainey who suffers from severe seizures.

11Alive first told you about their journey back in June. Since then, Lainey’s doctor signed off on her medical marijuana registration card, which officially became legal in Georgia this year.

That signature took almost a year and a half for the Clevelands, but it put them one step closer to medical marijuana.

“Now we’re one step closer, we can finally get the medicine,” Cleveland said.

She understands cannabis oil won’t cure Lainey, but she’s hoping it will improve her life.

“I mean when she wakes up and she’s holding her breath and you’re trying to talk her through seizures and you’re getting ready and you can hear the noise that she’s making,” Cleveland said.

Two weeks after Lainey’s doctor signed off on the medical marijuana registration card, it arrived in the mail. Cleveland and Lainey drove to Athens to pick it up from the health department there. Meanwhile, Erin reflected back on the last two years.

The 18-month wait came to an end moments later.

Erin finally had Lainey’s card in hand, knowing she’d be able to pick up the medicine soon.

“Yay! Thank you so much! We got ’em,” said Cleveland to the clerk.

Next time 11Alive visits with Lainey and Cleveland, cannabis oil will be part of the equation.

“Let’s go get some medicine for you baby,” Cleveland said to Lainey.

The Clevelands received their cannabis oil last weekend. Lainey had her first dose on Saturday night. 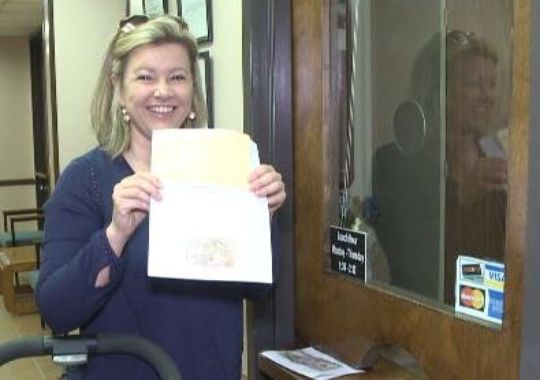